The future of face recognition technology-only unexpected, nothing impossible

The future of face recognition technology-only unexpected, nothing impossible

Jacky Cheung has recently been dubbed by netizens as “the catch of the singer”. At about 15:00 on July 13th, when the Weihai Public Security Bureau’s Gaodi Branch deployed Jacky Cheung’s concert security on duty at the Weihai Sports Center Stadium, the intelligent sensing police system on the west side of the stadium called the police and found a physical characteristic of a suspect with the theft. A similar suspect who was driving a motorcycle was immediately followed up for investigation, and he was successfully captured near the stadium. On the previous June 9th, the news of “Capture Fugitives Again” at his Jinhua concert held by him caused a lot of attention, and two fugitives were caught at once! Counting the Nanchang concert on April 7th, the Ganzhou concert on May 5th, and the Jiaxing concert on May 20th all captured fugitives, so far 8 fugitives have been arrested at his concert! Netizens all take this to ridicule: the song god is happy to catch it! 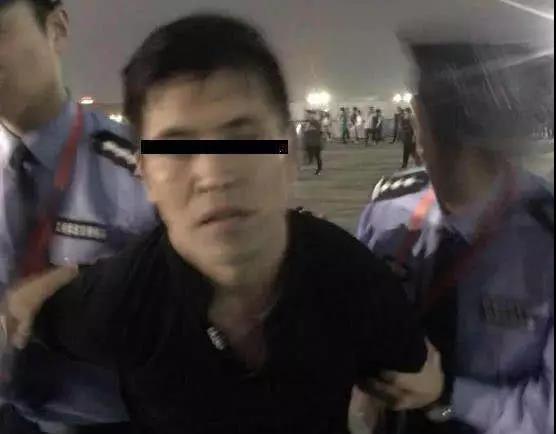 The ridicule belongs to the ridicule, in fact, the credit is attributed to the face recognition technology.

Because of the power of high technology, AI face recognition technology makes these fugitives invisible. The ability to accurately locate the person to be arrested in a crowded concert is entirely due to the work of the portrait recognition system installed at the entrance of the venue:

When the fugitive passes through the security checkpoint, the camera captures the fugitive’s facial information, and then compares it with the back-end database to confirm that he and the fugitive in the database are the same person, and the system will issue a warning message. After further manual confirmation, The police, who had been on standby at the scene, were dispatched to successfully take the prisoner in one fell swoop.

With the rapid development of face recognition technology over the past few years, with the support of artificial intelligence algorithms, it has long surpassed the accuracy that the naked eye can achieve. The current AI face recognition technology has been more and more widely used in security prevention and criminal investigation. When the police process illegal records, the staff collects portraits through the camera, and the comparison can be completed in just one second. There are countless successful cases of this kind, and this technology will help the police catch more criminals more accurately under the continuous application and continuous evolution.

In addition, face recognition technology can be widely used in more places. For example, the college entrance examination that can change the fate of many people, even when facing a recognized turning point in life, every year there are still news reports about candidates forgetting the admission ticket or missing the admission ticket, or cheating in the exam room and asking someone to take the exam. Today, with the rapid development of technology, these problems will no longer exist in the future. According to relevant media reports, some examination rooms this year have adopted face recognition technology. On the one hand, it eliminates the phenomenon of cheating on behalf of the exam. On the other hand, it provides convenience. In the case of losing the admission ticket, the “face recognition” function is used to treat candidates After verifying your identity, you can take the exam first to ensure that you will not lose your eligibility for the exam due to forgotten documents.

There will no longer be the fallacy in the public opinion of the college entrance examination that “you should be abandoned by this society if you don’t bring your admission ticket.”

In addition to ensuring safety, face recognition technology also involves all aspects of life, making life more convenient, saving time and more efficient. For example, in the Baidu World Conference last year, an inconspicuous face recognition entry channel was arranged. After some spectators discovered this channel, they entered the arena directly from the face recognition channel, saving a lot of time than other spectators who waited in a long queue to enter the arena! So at the Baidu Alliance Summit in May this year, everyone chose to “brush face” to enter.

“Face-swiping” brings convenience to people’s travel, and on June 28, China’s first facial recognition intelligent boarding system landed at Nanyang Jiangying Airport. Although it was only a regional action, it meant “swiping-face-boarding”. “Machine” has become a reality. Airports are different from scenic spots and company access control. They have extremely high requirements for security. Face recognition technology is used at the airport. Advanced artificial intelligence technology not only ensures the security of security check and customs clearance, but also further improves the efficiency of passenger traffic and reduces the airport. The strain and heavy pressure of human resources.

With the development of “black technology”, a series of problems that existed in the initial rise of face recognition have been solved. In the specific application of face recognition, the main problem has changed from “recognizing a person’s identity” to “judging whether the face in front of the system is a real person”. This problem is also called face anti-counterfeiting. Use infrared camera live detection technology to detect subtle facial movements and micro expressions, with high recognition. It is impossible for fake faces and photos to fool the system. Makeup, glasses, twins, etc. can be used, only when the system detects It can be recognized only when it is a “living person”, and the false recognition rate and rejection rate are almost zero.

In the future, face recognition technology will be more widely used in many scenarios such as finance, security, e-commerce, smart phones, and entertainment. With the R&D investment of national scientific research institutions, the research of enterprises on technology, and the promotion of markets, the value And the role will become bigger and bigger. Not only face recognition, but also fine facial analysis. Through the collected data, you can scientifically analyze your personal preferences, habits, and predict what you want to do. There is no need to choose independently. You can do what you want to do first. Not only can you “brush your face” “, and are more concerned about people’s lives.

Relying on the rapid advancement of the Internet and artificial intelligence, the bright future of face recognition is infinitely bright.

For the first time in the smart door lock industry, the introduction of vitality sensing technology, the user can automatically wake up for identification as long as the user is close, and at the same time, the user is identified in vivo, realizing natural and safe interaction.

Shanghai Lingzhi Technology has been committed to the research and exploration of artificial intelligence. 20 years of accumulation and cultivation of face recognition related technologies have obtained “face recognition method based on sparse regularization to achieve multi-band face image information fusion”, etc. 10 Remaining invention patents. In addition to smart door locks and access control, Shanghai Lingzhi Technology has carried out product development and design in many application fields such as payment, public security, and border inspection. With the popularization of high-definition urban surveillance, the obstacles of face recognition in data collection are greatly reduced, and the quality and application fields of face recognition are improved. It is estimated that in the next three years, the face lock is expected to have annual sales of over 10 billion, and it is expected to form a market scale of over 100 billion in annual sales in the next ten years. 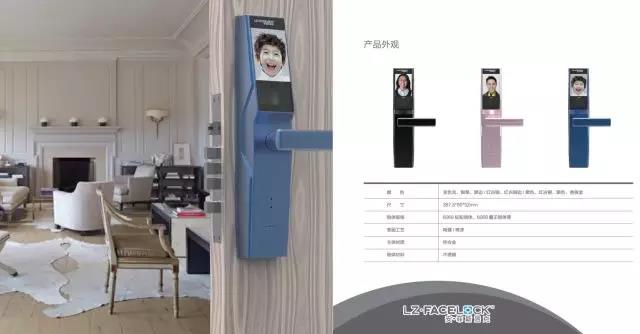 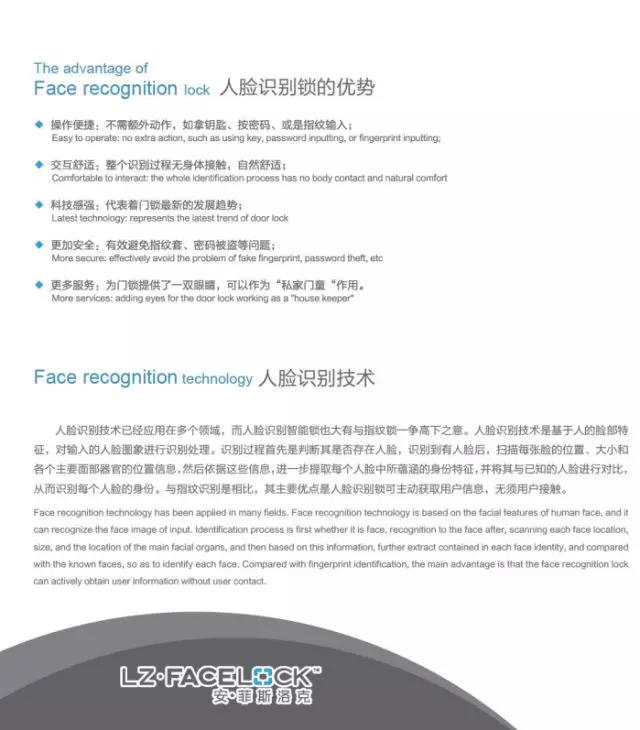 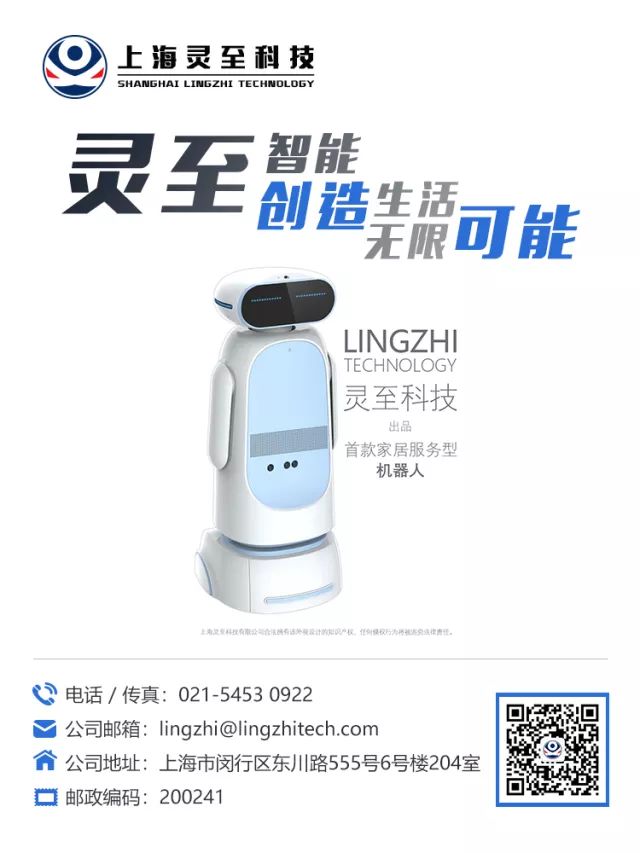